Drainage pipes have been installed by Bi-State Utilities, a subcontractor to E Meier Contracting. E Meier will perform the bulk of the project, which is the removal and replacement of pavement. This letter from E Meier was delivered to Fairoyal residents on 7/21. By contract, they are still required to finish by October 21st, or face financial penalties. This letter from the Director of Public Works was delivered on 7/27, providing additional explanation.
A common question is "What do the different colors of paint mean?"  Utilities are located and marked through the Missouri One Call System and each color represents a type of utility.
WORK IS PROCEEDING QUICKLY!
Trash: we have asked Waste Connections to pick up first thing in the morning, before our contractor starts pouring concrete. Please put cans out BEFORE 6AM on your pickup day.
Mail: USPS drivers will not get out of their trucks, so your mail may be delayed when your segment is closed. If you are expecting something urgent, you can still pick it up from the post office on Grupp Road.
Phase A: Poured F 8/6, reopened Tu 8/10
Phase C: Poured Tu 8/10, reopened F 8/13
Phase B: Poured W 8/11, reopened Sa 8/14
Phase D: Poured Th 8/12, reopened M 8/16
Phase E: Poured F 8/13, reopened M 8/16
Phase F: Poured M 8/16, reopened Th 8/19
Phase G: Poured W 8/18, reopened M 8/23
Phase H: Poured Th 8/19, reopened M 8/23
End of north side
Phase I: Poured M 8/23, reopened F 8/27
Phase J: Poured W 8/25, reopened F 8/27
Phase K: Poured F 8/27, reopened W 9/1
Phase L: Poured W 9/1, reopened F 9/3 (after early test result)
Phase M: Poured F 9/3, reopened Tu 9/7
Sidewalks and Curb Ramps: Most Poured W 9/8
Phase N: Poured F 9/10, reopened Tu 9/14
Phase O: Poured Tu 9/14, reopened late F 9/17
Bi-State Utilities was on site M 9/13 and Tu 9/14 to complete grading around drainage improvements
Phase P:  Poured Th 9/16, tentative reopen M 9/20
Week of 9/20: Parking Areas, Driveway Aprons, and Curb Ramps (if not previously completed)
Cleanup/Restoration Work
Potential to complete before 9/24

Great work by the crews from E Meier! Never on a project have we received so many positive comments from residents on the speed and organization of a project. Other than bridge replacements, this is the largest project Des Peres has undertaken in many years. 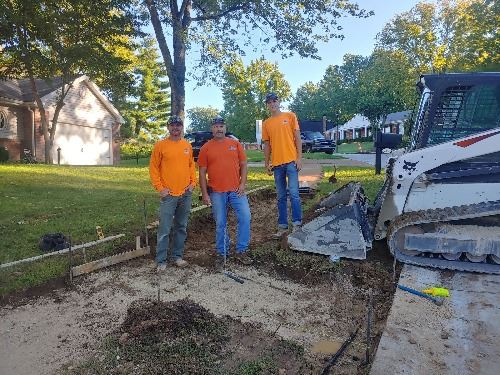 The setup crew of 4, led by Greg, was on-site daily throughout the project. (operator not pictured) 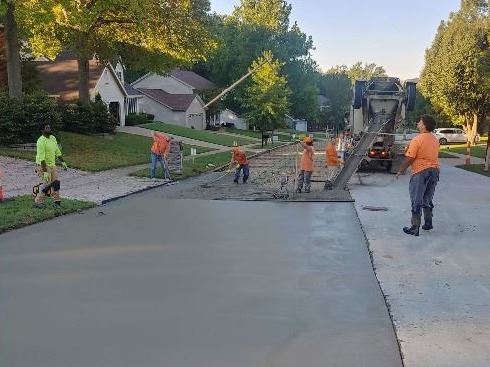 The pour crew of 6 was on-site every 2 or 3 days to pour and finish the concrete.


The Phasing Map shows the order of work A, B, C, D, etc. and the letters have also been painted on the street. Click the image below to enlarge or download a pdf.

Project Background
Many of our older concrete streets consist of 5" of concrete on top of compacted soil. Due to the extensive failures of the existing pavement, the concrete street and underlying soil will be removed, and a new cross-section will be constructed, consisting of 4" of rock and 8" of concrete.  Slabs will be tied together using epoxy-coated steel rebars.

Please note that neither the existing nor new concrete is "colored" concrete.  While there is some limestone-based concrete around the city, most of the concrete contains Meramec sand and gravel, which provides the orange/brown look.  While the new concrete initially appears to be a bright white, over time, the color mellows and the top layer of cement wears off, revealing the brown sand and gravel underneath.

This project was originally scheduled for 2020 construction, but will instead take place in 2021. Design was finished in early April 2020, but the project was then put on-hold due to the anticipated budget shortfalls associated with COVID-19. Capital Improvements are funded by sales tax, so with West County Center and many other businesses closed (or conducting limited business), revenues  dropped dramatically.

The project will replace the remaining portion of Fairoyal Drive, from near East Royal down to Barrett Station. The entire street will be replaced, just as the north-south portion was replaced in 2018. While the street is being replaced, we are also planning drainage improvements along the north side of Fairoyal where groundwater consistently seeps across the sidewalk and into the street. An engineering consultant, HR Green, performed conceptual design and held an open house with effected residents, then completed final design. This is not a stormwater project, but a groundwater solution. Traffic calming neckdowns will also be installed at three locations as indicated in the presentation below.

A project meeting took place Thursday 2/27/20 at 7pm in the Oak Room at the Lodge. A notification letter was sent to adjacent residents on 2/12/20.

The presentation is available for download, as is the animation showing the order in which work is planned.

A shortened, but similar presentation was made at the 1/25/21 meeting of the Board of Aldermen. Following the presentation, the Board voted to proceed with advertising for bids.

Seven bids were opened 2/19. The Board of Aldermen approved a contract with E. Meier Contracting at their 3/8 meeting.
The full bid documents can be downloaded from the bidding page.